Day 2 is over already! Today was an adventure. We spent the morning at the National Geological Survey in Norman. Who knew there was such an interesting place here in the home of the Sooners? We got to see (literally) tons and tons and tons of rock. This place is a warehouse in which core samples of rock drilled for oil and natural gas wells are drilled. People come and look at these core samples years after stuff is drilled. There are also samples from 43 states other than Oklahoma. We also got to see an x-ray machine, developed by an engineer, in house, that they use to examine rock and see just what it looks like on the inside of the core, without doing any type of destructive testing. It was fascinating! I could have spent an hour or more longer there, just talking with the people who are employed there.
Lunch was Raising Cane chicken, which was outstanding. I'm not sure it's better than Popeye's, but it was delicious.

After our meal, we moved on to a really cool place called Geoeye, formerly Space Imaging Inc. I was so impressed by the professionalism exhibited by these folks I just can't say enough. We got to see exactly how images are received from satellites. These guys sit, all day, and track satellites that are moving at a velocity of roughly 7 km per second. For you non metric people, that's around 15,000 mph. Pretty amazing. They have satellites that have a resolution of less than 1 meter! This from over 640 km in space. That means that the optics on this thing are good enough to resolve an object of a size of less than one meter from a distance of 640,000 meters away. That is equivalent to being able to recognize a refrigerator from a distance of around 400 miles away! Maybe I should call my mother-in-law in Louisiana and have her move her fridge outside and see if I can see it from Oklahoma. That's roughly the same thing. This place was literally bursting with physics! Optics, kinematics, rotational kinematics, gravity, holy cow! How do I get a job there?!? Again, I could have literally spent a whole day here, but sadly we had to go after only a few hours. Some people in the group were bored and actually fell asleep, but I couldn't get enough.

Tomorrow begins our Rocketry cycle, so that should be a good time. Here are a few pictures from this afternoon; sadly my batteries were down in the camera this morning. 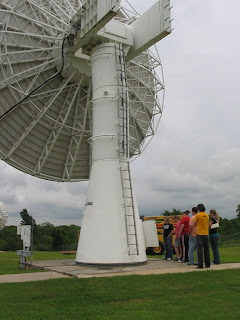 This one is part of our group standing near one of the dishes used to receive information from the satellite. As you can see, it's pretty big...roughly 30 feet across. Good engineering here to get this thing to work. It tracks the spacecraft as it moves from horizon to horizon. 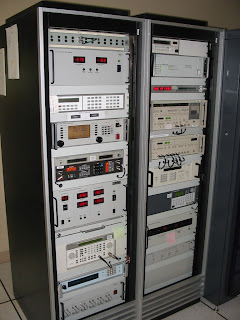 This is a very small portion of the tons and tons of equipment they use to track and obtain information from these satellites. This company is a private company, but the government uses them extensively, particularly in the area of agriculture. Some of their satellites are owned by India, they just pay them for time on their bird.